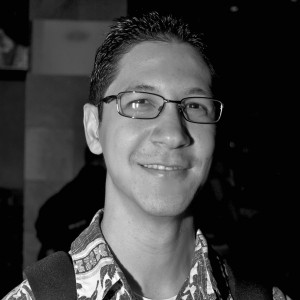 Kristopher ‘Topher’ Schlund, a full time geek, is a born and raised Hawaiian of German and Japanese ancestry. He has been interested in computers since owning his first computer a Commodore 64. It was not until his IBM 286 that things really started to ‘click’, and he has been tinkering ever since.
Topher has degrees both in Information Technology and eBusiness, which basically makes him a geek with marketing skills and some. While attaining his degrees he worked at Decurion Corporation as part of the Hawaii Information Technology Team, which assisted the local and home office personnel in California. Topher has also worked at Wesellthings4u as an Information Technology Support Specialist, and at the CompUSA tech shop as a level 1 support personnel. During this time he made the transition to the Mac side of the force, all the while peeking in touch with his inner PC. He then was employed as support for a small production house called Inseason Productions, as well as a sales representative at Video Life. Topher has also had independent contact work for various small businesses that include Rainbow Drive-in, Phoenix Security, Club Roxzza, Ono ToGo, Indulge Iced Tea, and Ground Transport Inc.
While Topher is not in front of a computer, you will find him either on a hike, shooting a rifle or an image with his camera, playing soccer, or eating his way to discovering new eateries.